When I moved from Windows to Mac, it was a mostly smooth transition. The two OSes share many of the same features and settings. Finder is like Windows Explorer, Safari is like Internet Explorer, and iTunes is like… iTunes. Ever since the transition to Intel chips back in the mid-2000s, the two brands even share similar hardware.

That knowledge was a small comfort to me as I struggled with all the things that OS X does differently. There are just enough things to make the transition annoying at times. Thankfully the active development community has made a lot of great apps for Mac that can help make Apple’s OS a little more like Windows.

Get Useful Features of Windows on Mac OS

Of all the things in OS X that annoy me, this is one of the most egregious offenders. Instead of implementing cut and paste like Windows and Linux, Apple decided that you only need a copy option. 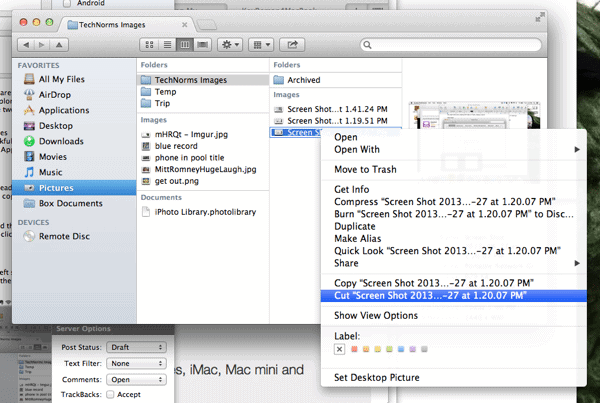 To fix this, download Xtrafinder. It’s a cool third-party app that sits overtop Finder to add the features that should have been there in the first place. It adds a “cut” option to the right-click menu (along with tabs in Finder, always a plus).

One feature I often used in Windows 7 was the ability to snap windows. Drag one to the left side of the screen and it would resize itself to take up the left side. Ditto for the right. Drag it to the top to maximize it. However, if you like being able to divide the screen into half-and-half, BetterTouchTool includes an Aero Snap-like feature that operates the same as it does on Windows. You can also drag windows to the corner of the screen.

Aero Preview was a great feature introduced in Windows 7. Being able to see previews of open windows just by hovering your mouse over the app icon is handy. In order to do that on Mac, try Hyperdock. Although it’s $10 on the Mac App Store, you can download a free 15-day trial from the developer’s website. It offers Aero Preview functionality in addition to Aero Snap window management. In OS X, Command is a new Control. All those shortcuts you knew back in Windows now use the CMD key. For some, fighting muscle memory can get tiresome. If it’s just the shortcuts that irk you, a trip to the System Settings can solve that problem. If you’re looking for something more permanent, try KeyRemap4MacBook. It edits your key layout to whatever you’d like.

Overall, I don’t miss a lot of things from Windows. OS X is a full-featured OS with a lot to like. Using a Mac is a good experience right out of the box. However, there’s no reason why we can’t make it a little better.