Motorbikes have fascinated people since they were first created. You may not like them due to safety considerations, but you won’t understand the joy or riding until you have driven one. Bikes are popular for the speed, acceleration and maneuverability they offer.

Ducati is one of the biggest names in biking industry and they create some of the best bikes on the world. As a bike enthusiast myself, I’ve create this Ducati Windows 7 Theme. If you are a fan, download and enjoy the Ducati Experience on your Desktop. When you download and apply the Ducati Theme, the regular old Windows Icons would be replaced by our Custom Theme icons.

No Bike theme is complete without Biking sounds. We have included some select Ducati Bike sounds for a complete Ducati experience on your desktop.

Ducati Trivia – Origins of The Company and The Very First Ducati: 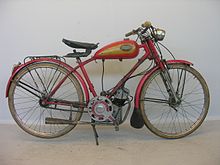 Barely a month after the official liberation of Italy in 1944, they announced its intention to sell this engine, called the “Cucciolo” to the public.

The first Cucciolos were available alone, to be mounted on standard bicycles, by the buyer; however, businessmen soon bought the little engines in quantity, and offered complete motorized-bicycle units for sale.

In 1950, after more than 200,000 Cucciolos had been sold, the Ducati firm finally offered its own Cucciolo-based motorcycle. This first Ducati motorcycle called “Cucciolo” was a 60 cc bike weighing 98 lb (44 kg) with a top speed of 40 mph (64 km/h), seen in the picture. [Source : Wikipedia]